In the Kapil Samhita, as Sanskrit text composed in 15th century, ancient Odisha or Utkal is referred to as the most glorious region of India or Bharat.

(of all countries India is the best, and of all places Utkal or Odisha Like Utkal, there is no place on earth.)

Straddling the road between North and South India on East coast, Odisha has naturally evolved as eclectic culture. The very symbol of this synthesis is lord jagannath of Puri the greatest deity in the modern Hindu Pantheon.1

The sacred place of Puri or Purusottam Skhetra in the East assumed increasing prominence through ages as one of the four famous Dhams, others being Badrinath in the North. Dwaraka in the east and Rameswaram in the South.

It was recognized by Adi-Shankaracharya as one of the eminent places of pilgrimage in the eight century A.D. Puri  assumed more and more importance as great vaishnav Acharyas  like Sri Ramanuja, Sri Vishnuswami, Sri Nimbark and Sri Madhavacharya visited this place.

Subsequently it was visited by great saints of various religious commities namely, Nanak, Kabir, Sri Chaitanya and so on. It was compared with Kashi, Mathura, Vrindavan, Ujjain, Prayag, Gaya, Ayodhya  and other sites of pilgrimage.

The prime symbol of Odia identity is lord Jagannath. The early dawn of each Odia breaks with the breathing of the virgin air that emanates from the body of Lord jagannath.

He is the spiritual and material chief of Odisha, who is rightly called as “Bada Thakura” (The Greatest God of Gods), who resides in the “Bada Deula” (The great Temple) on the “Bada Danda” (The great Pathway) situated on the shore of the “Mahodadhi” (The great sea) at “Purastama” (The best of the cities).2 He is known as various names “Jagannath” (The Lord of Universe), “Patitapabana” (The redeemer of fallen), “Purusottam” (The Highest self) and “Kalia Santa” etc. 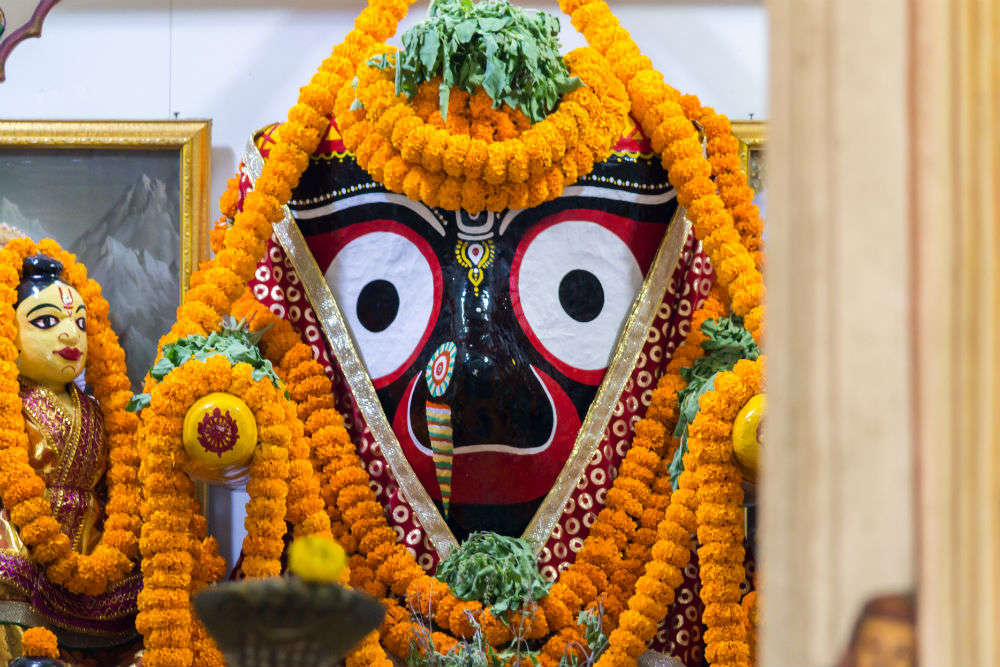 Seldom in the religious history of mankind the name of a deity is known, whose origin is so mysterious and antiquity is enthralling as much as our believed deity Lord Jagannath. It is a historical fact that, Lord Jagannath was originally god of the aboriginal shavaras. But later on he was established as the Lord of the universe to whom all great Hindu Acharya worshipped with great veneration. Lord Jagannath is the most democratic God of all.

Odisha and Odia’s have no special identity without Lord Jagannath. Lord Jagannath and Jagannath cult is the pivot of the Odia religion. The life and style, the culture and consciousness of the people of Odisha are shrouded with the mysticism of the Jagannath cult. That the choice should have been the Lord was but obvious and inevitable, since the religion (Dharma) and culture (Sanskruti) of Odisha has been called Jagannath Dharma and Jagannath Sanskruti respectively.3

Jagannth Dharma is the Gana Dharma (Religion of the masses) of Odisha and embodies with in itself the principles of secularism, religious tolerance, co-existence, equality of castes and creeds and socialism. The religious culture of Odisha is the culture of Lord Jagannath. Jagannath is the great institution which sustains it and keeps its going. The great myths and rituals have revolved round him concentrically and have shaped the religious culture, that is Odisha. Lord Jagannath is the presiding deity of Puri and a prominent symbol of Hindu Kingdom. The Gajapati  King of Puri was recognized as the supreme royal authority, for safeguarding the hoary traditions and long ranging tiruals, year-round festivals with all Pujas, Veshas, Prasads and Mahaprasads. But the king did not claim any supremacy rather he was humble, loyal devoted and committed to the famous traditions and heritage honoured by all sections of Hindu community.

The king however, felt himself  as the first servant of Lord Jagannath although he is ever regarded as the moving god (Chalanti Vishnu). We have a golden example, that the Gajapati Kings regarded themselves as Sevakas of Lord Jagannath, Gajapati Purusottamadeva  started the ritual of cleaning the cars (Cherapahara), which continued so far without any breakage.

Even today the grand ceremony of sweeping the cars remains as the most importance royal duty (Rajaniti) and makes the presence of Gajapati Maharaja as indiscipensabe in the car-festival of Puri.