Odisha is famous throughout the world for her rich cultural heritage and beautiful templs. A group of temples and other archaeological remains belonging to medieval period are of great interest and tourist attractions of the place. 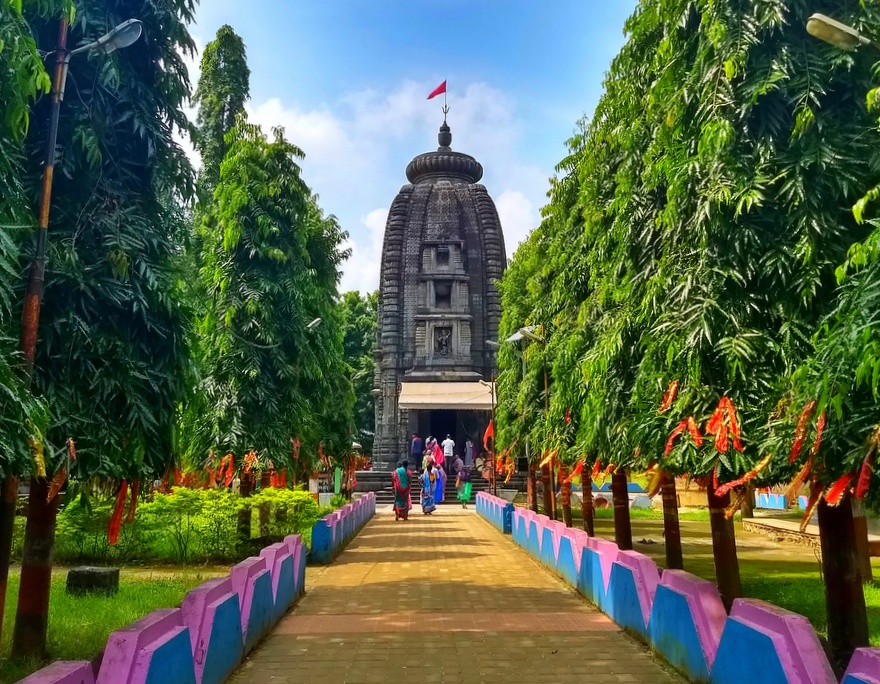 Khiching in Mayurbhanj district, became a flourishing centre of art under the Bhanja rulers who traced their descent from one Virabhadra Ganadanda who was born out of an egg of a pea-hen and was brought up by sage Vasistha. Khijjinga-Kota or modern Khichinga is described as the capital of the rulers of the Adibhanja royal family, and therefore it is reasonable to attribute the architectural activity to their patronage. Whatever may be their political allegiance, their relationship with the Bhoumakaras is unmistakable.

In the post there were several monuments at Khiching. The Kutaitundi temple, which was an important temple of this phase, has been thoroughly repaired. There was another panchayatana temple complex which had a beautiful image of Siva as the presiding deity of the central shrine. At this site, the khandia deula has been erected making use of lod and new materials. The Chandrasekhara temple at the south western corner has also been reconstructed. But before repair, the bada consisting of the Pabhaga, Jangaha and baranda with the recessed kanti marking of the bada from the gandi was still intact.

During the time of excavation by archaeological survey of India in the year 1908, several images of gods and goddess where found including the images of Buddha. These are preserved in a museum housed within the temple compound, which was constructed by Maharaja. That museum now accommodates a large number Purna Chandra Bhanj Deo in the year 1922.

The courtyard of the museum has several sculpted parts of ancient temples on display in open. The presence of Buddha and Avalokiteswara idols suggest a commendable amalgation of religion and culture. A visit to Khiching will remain incomplete without visiting the nearby village Kesra. One will come across sculptures carring idols and household objects, like their forefathers. Khiching museum was the second oldest mumeum in Odisha. During Bhanja period Sailendra Prasad Bose (Birbal Babu) was the 1stchairman of that Khiching Museum. Khiching also famous for Muguni Toki & Black chlorite items.

In 1924-25 construction of a new temple for goddess kichakeswari was proposed and accordingly J.A. Page, Assistant superintendent of the Archaeological survey of India, gave a plam of Indo-Aryan style of temple design. After the death of Maharaja Purna Chandra Bhanj Deo in 1928, the progress in the matter was delayed for new years and the work for the temple began before the close of the 1933-34 completed by the end of 1941.

The deity was installed on 14th March, 1942 a midist  pomp and ceremony. The temple is made up of Black chlorite which faces towards the east and consist of rekha vimana and stands over a high platform of 1.20 meters and Rs.85,000/- was spent. The height of this temple was 68 ft.

The temples of Khichinga do not possess any Jagamohana, a feature also found at Bjrakota and Kualo. The sculptures recovered from the place are beautiful specimens, and in then, because of the geographical position of Khichinga, we find a fine synthesis of the Orissa and the Pala style.

As Nihar Ranjan Ray observes, “while the qualities of largeness and round smplitude of modeling and movement are shared by khiching with the rest of contemporary Orissa, the psychological expression of the faces and metallic smoothness and precision are more closely related to contemporary Bihar and Bengal. The, sculptures, which probably belong to the 10the and 11th centuries, show how the traditional Orissan style was strengethened by the assimilation of new elements. The temples of Khiching belong to a matures phase, and the sculptures such as Naga and Nagis in treatment are akin to those of mukteswar temple, but for our purpose we have included them under the Bhauma epoch as the Bhanja rulers who ruled from Khiching probably used the Bhauma era in their copper plites, and possibly owned allegiance to the Bhaumas at one stage but later on emerged as de facto rulers.

Taken as a whole the period of the Bhaumakaras was a creative one in the sphere of art and architecture. The temples have many things in common with those belonging to the earlier phase, but the development of the style can also be seen. For example the rectangular Jagmohan of the earlier times continues, but a distinct advance over the older design is introduced by building its roof on the contilever principle, then, at some later stage, this feature is discontinued and we find only the Deula without any Jagamohana.

The elevation of the Deula is somewhat similar to the earlier type, but as the Kanakesvar temple testifies, attempts were made to increase its height. The sculptures of the period are no longer treated in low relief but become bold and impressive. As the style progress there are reasons to infer that possibly a Jagamohana of the pyramidal form was also invented, to match the tall Deula.